WHAT ARE ELECTRONIC CIGARETTES 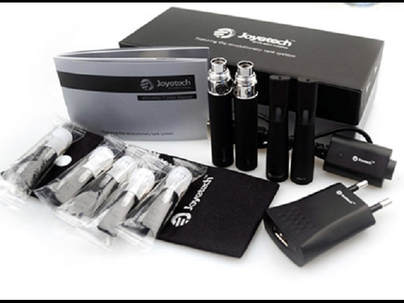 What is in the exhaled vapor/steam? The vapor is visible and simulates smoke and most times contains a mixture of trace amounts of nicotine (also available without nicotine), flavoring (also available without flavoring) and propylene glycol and/or vegetable glycerin. Propylene glycol is the liquid used in fog machines at shows and clubs. It is also the main component in some asthma inhalers as well as many household products. It is generally regarded as safe for consumption by the FDA. Fewer studies have been done on vegetable glycerin based formula.

Who uses this product? This product is intended for smokers and others addicted to nicotine who are looking for a less hazardous way to maintain their nicotine usage and avoid known risks to their own health and the health of those around them.

Does it contain tobacco? The name electronic cigarette is quite deceiving since the device actually contains no tobacco and nothing burns. The lack of combustion means reduced carcinogens, no smoke and no tar.

Does using the device save money over smoking regular cigarettes? The average smoker spends between $2000 and $4000 a year on cigarettes. Using electronic cigarettes can effectively cut that in half.

Is it legal to use inside? Yes, except Suffolk County, NY and the state of New Jersey. Any establishment, however, reserves the right to ask you not to use it on their property so please be courteous and step outside if asked.

Where can I get one of these? They are mostly available for purchase on the internet. Simply search electronic cigarettes or go to our links page for trusted vendors with reasonable prices.

What is it? The electronic cigarette is also known as an “e-cig”, “an e-cigarette”, “a personal vaporizer”, a “PV”, a “nicotine vaporizer” and many other things. It is a device used to intake liquid nicotine in vapor form and is used by more than a million people as an alternative to cigarettes and in situations where cigarettes are not permitted.

How does the electronic cigarette work? A rechargeable battery powers a heating element called an atomizer which touches a cartridge holding e-liquid (aka nicotine liquid). The atomizer heats (steams) the liquid turning it into a vapor which is inhaled and delivers nicotine to the bloodstream. After the nicotine is absorbed, the excess vapor

IS There second hand Vapor when using Electronic Cigarettes?

New studies show that there is no second hand exposure when using Electronic Cigarettes.

Because e-cigarettes vaporize liquid rather than burning tobacco, most of the harmful compounds found in smoke were not present in e-cigarette vapor. Those few compounds that were found were at such minuscule levels that toxicology analysis detected no risk (cancer or non-cancer risk) to public health from environmental e-cigarette vapor.

ARE Electronic Cigarettes approved by the FDA

The chemicals used in electronic cigarettes are approved by the FDA. These include propylene glycol, vegetable glycerin, flavorings.

The FDA is in the process of regulating Electronic cigarettes as a Tobacco product.

You can find more info located at